A field with cows and a broken spaceship

I did a new painting that is very much inspired by my cycling tours. I often take pictures while I'm out, even if I have already seen this same old route a lot. There are always new views because of different light or different clouds, sometimes I see animals that I don't see normally and stuff like that.
So this looks something like the landscape I am cycling through around where I live. Except for the spaceship 😔
Here are a few photos that I took... 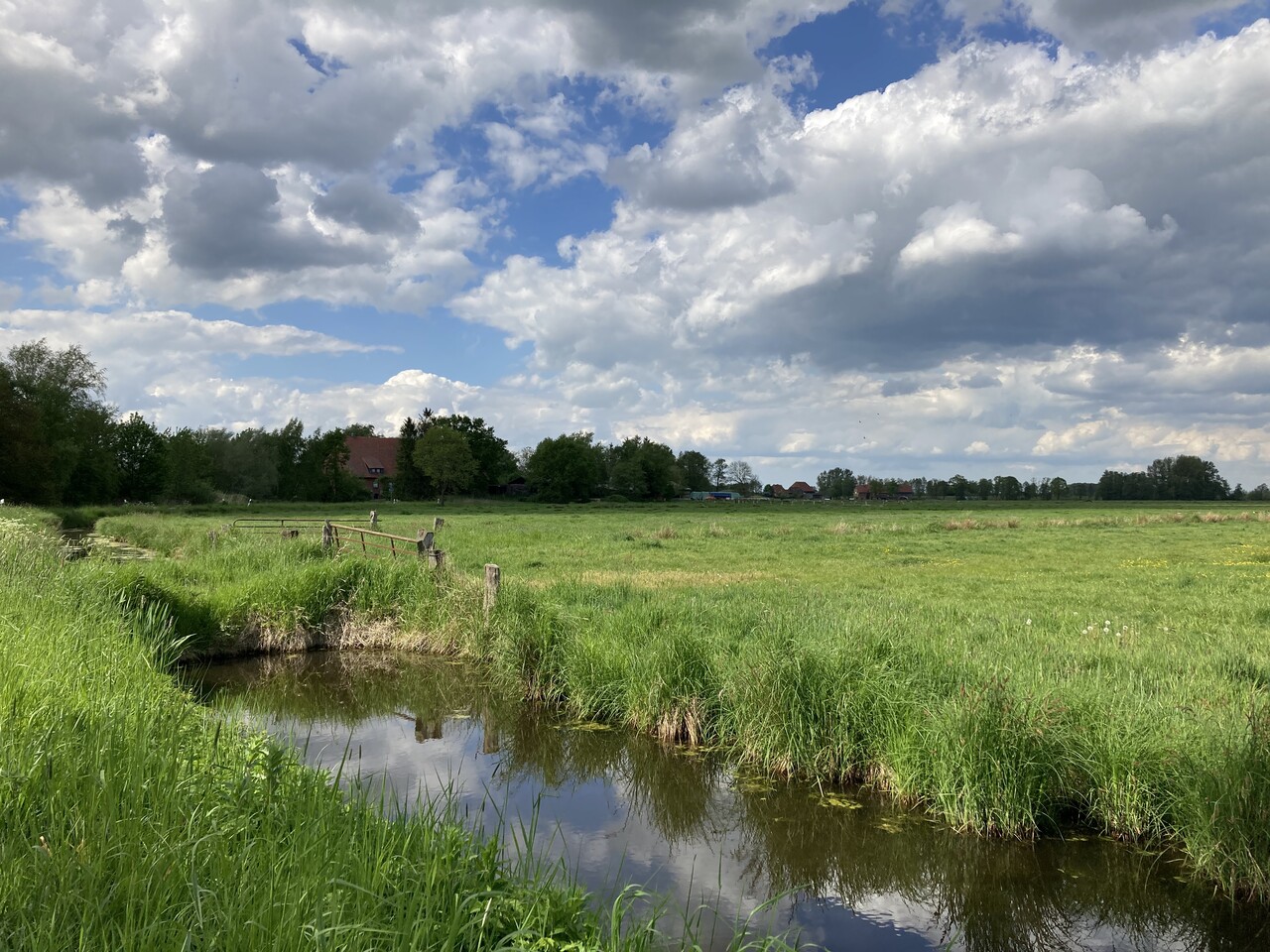 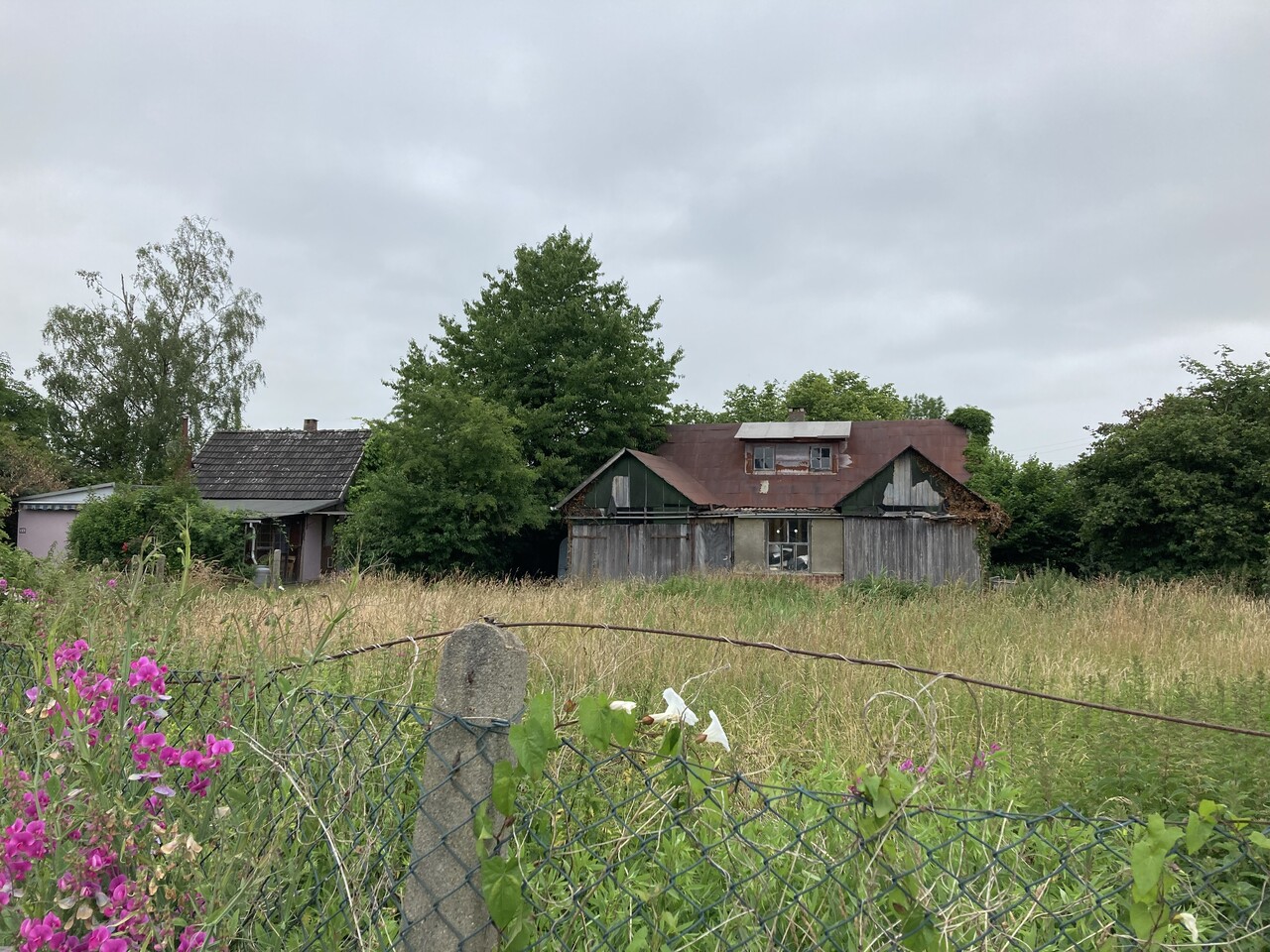 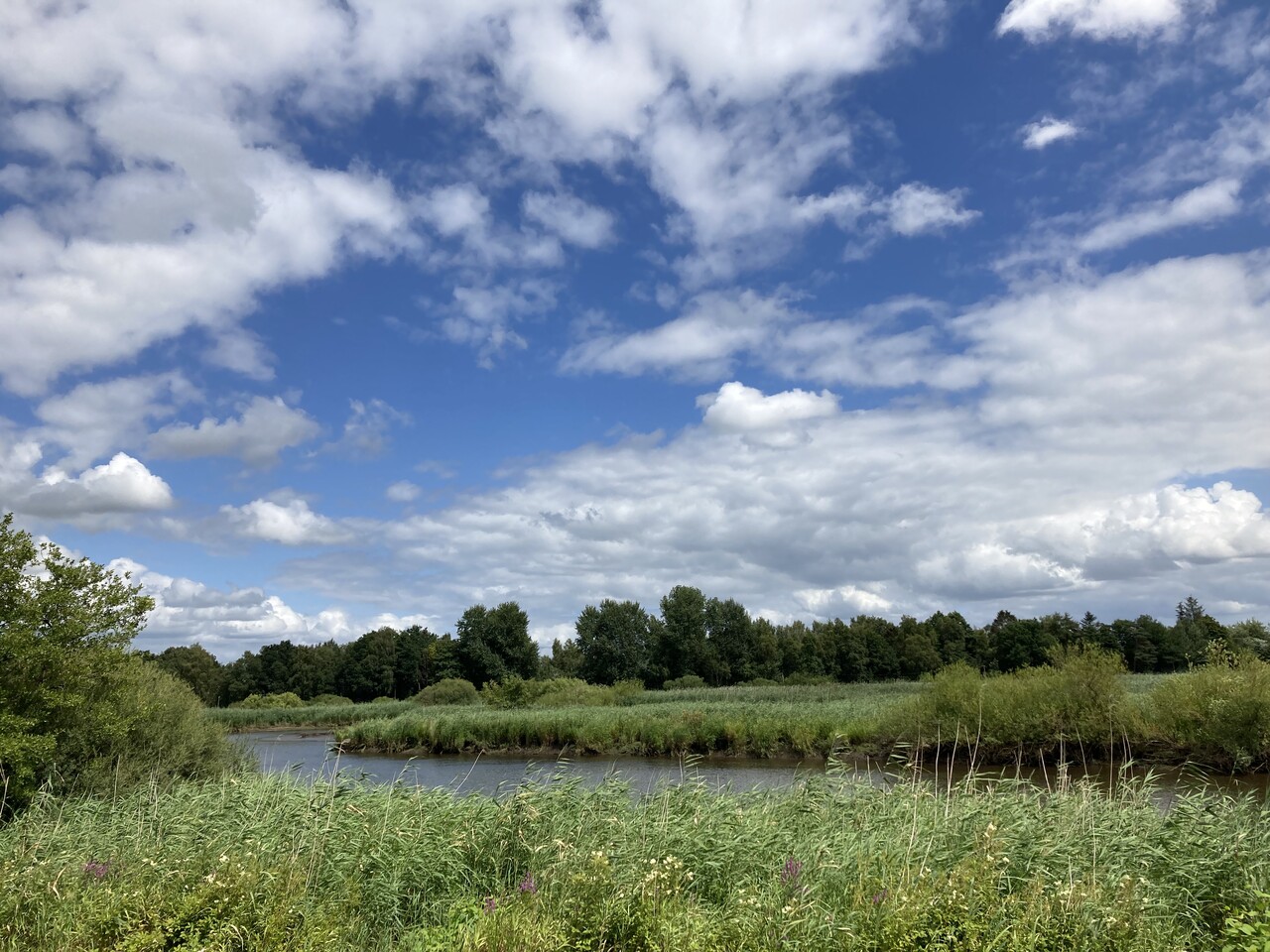 I find being outdoors very rewarding and inspiring, it gets my head free. So I felt like integrating it into my work. Actually maybe I could do a little series of paintings from my bicycle tours 🧐
I want to upgrade and improve my cycling game so that I can go further for more adventures!
Okay, enough about my little sporty hobby and back to the piece. I've recorded a timelapse video! Check it out to see the making of 🙂

So, lately I am doing some art experiments (yet) again 🧐 This particular piece (see below) was quite fun and what I liked most about it was the approach of the underpainting/sketch in pastel tones. Somehow this made me pick (to me) interesting and vivid colours and well - as usual - I have also been enjoying square brushes. More precisely my favourite one is a rectangle.
Now in retrospect I am also thinking about the use of lines. This one didn´t start with try-hard precise outlines that I would fill but instead I added some lines on top in the painting process. I kind of like how that tuned out. Maybe I should try that more often... Lines are fun too, though. The experiments never end, I guess!
I also guess I just like trying different things way too much 😜
Anybody who reads this, I´d be delighted to hear about your own art process and if you like experimenting too or if you are rather settled on a certain kind of style or approach. Feel free to let me know in the comments 💬 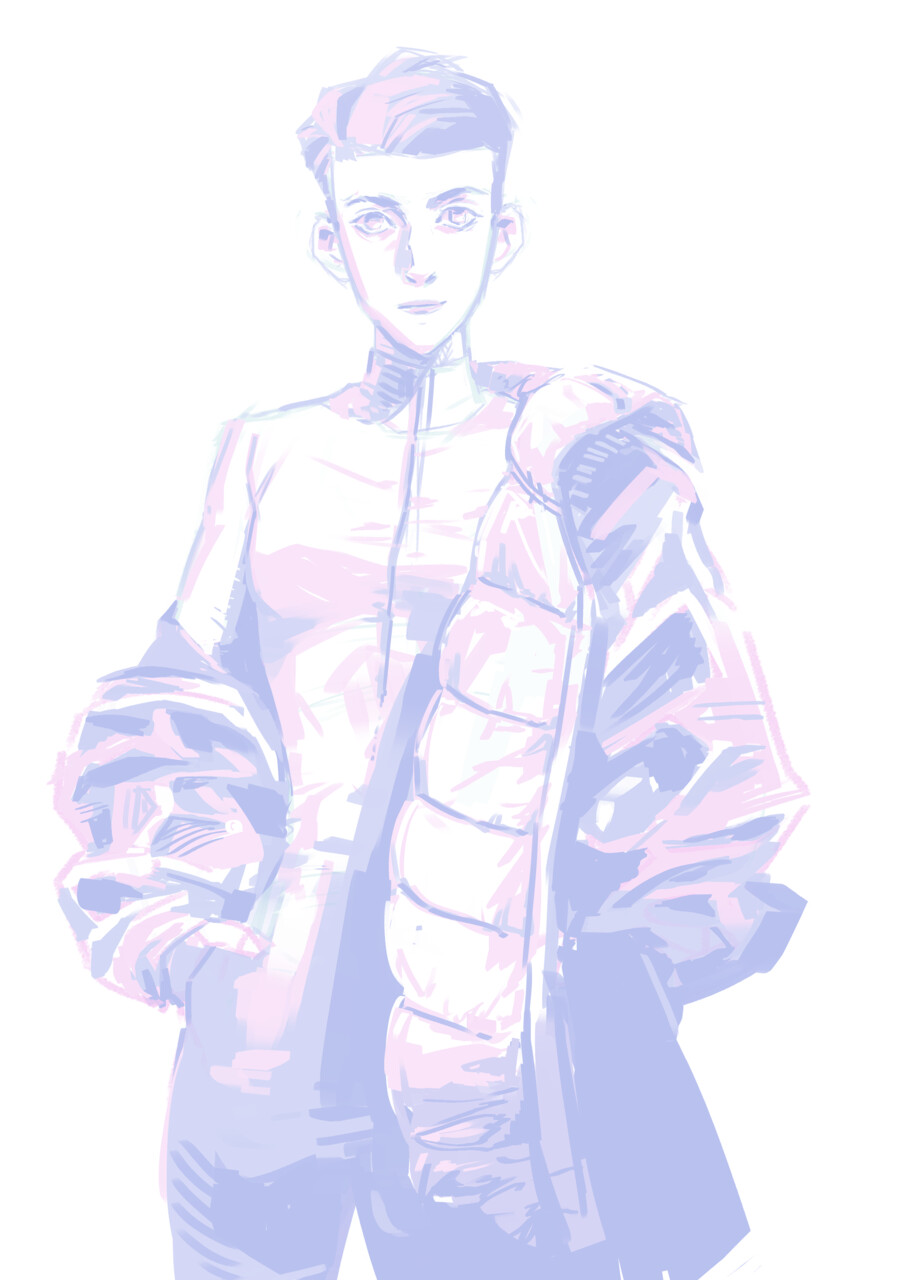 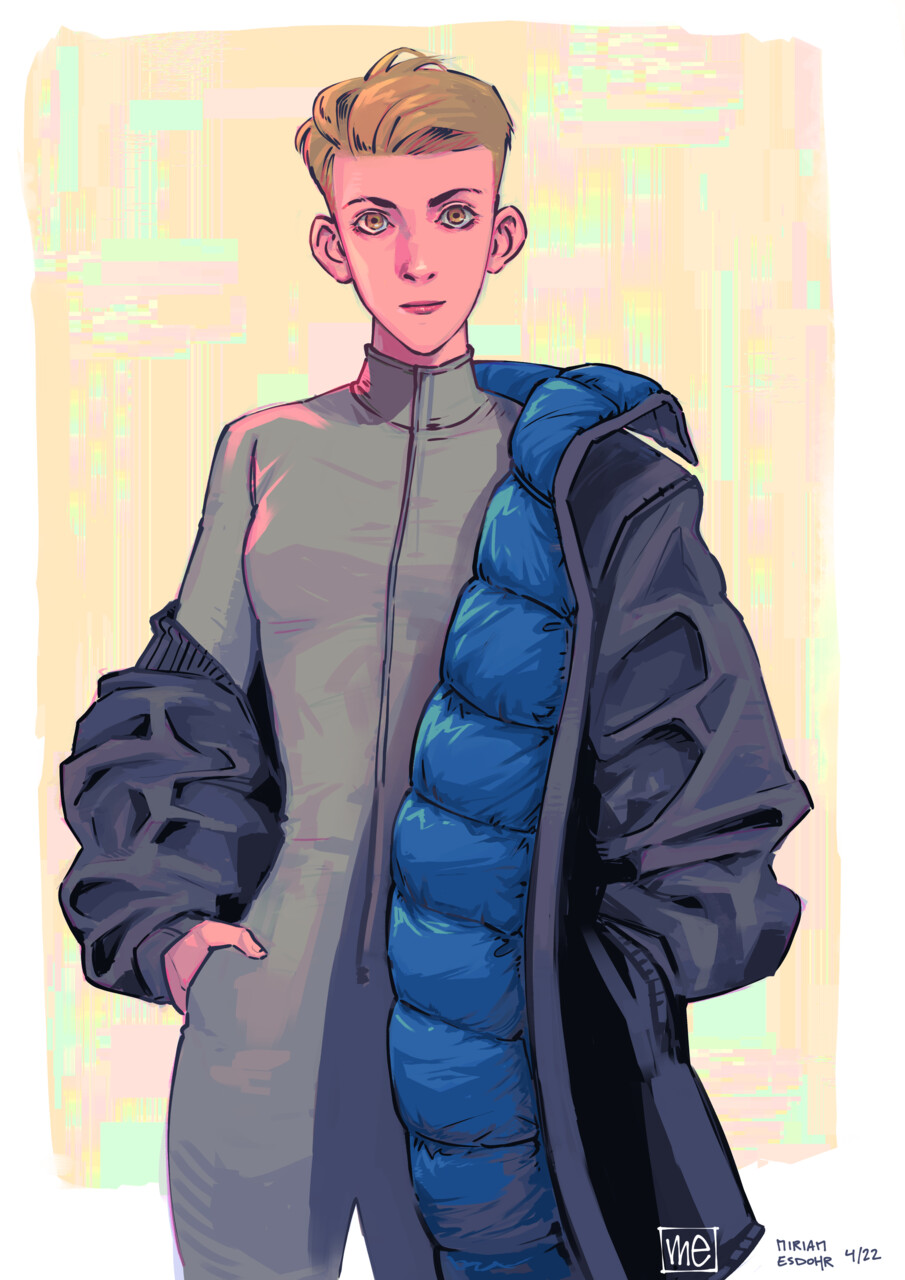 Not sure who is causing who a psychedelic trip in this one. I drew it on the weekend using Procreate on my iPad and I was really just playing around, drawing what came to mind and when I picked a random brush for the background color, it mixed in the colors of the above layers into the green. That, I really liked, it really was a happy accident to me and gave it this extra psychedelic touch I guess. When I started drawing the hand that was supposed to hold the "frog" my initial thoughts were: "Is he cat-like playing with that frog to eventually eat it?" but well, this came out. Might still eat it though, who knows...
I've recorded a timelapse video again, too! 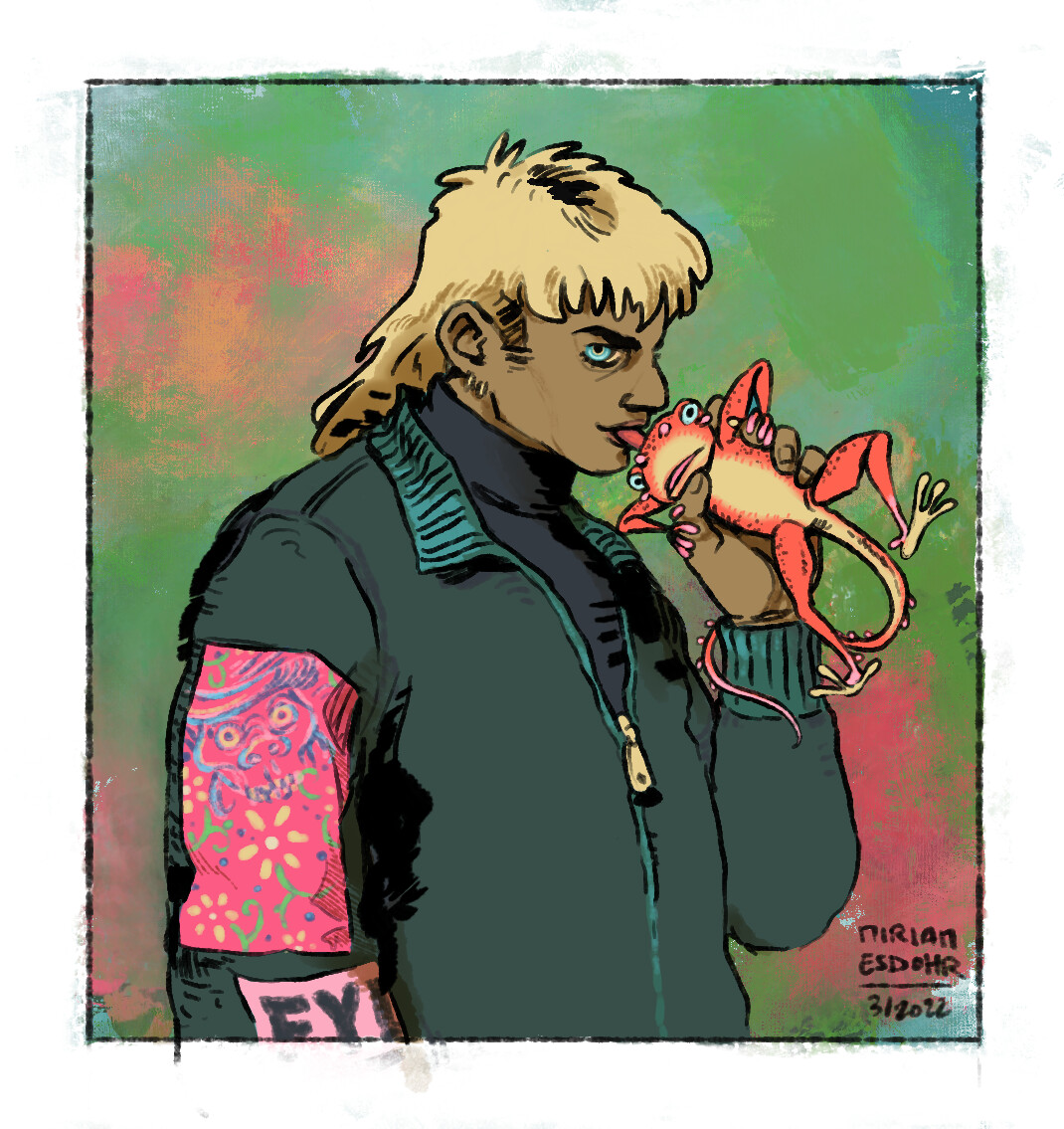 Back To Flint & Mortimer

I‘m back! Well, slowly getting back into a working schedule. It’s been a while that I made a blog post. My private life needed lots of attention lately, big changes happened, an important personal goal was reached, I am happy.
As of now, I picked up the comic project of Flint & Mortimer again, which I put aside when it was put on hold for about a year by the team.
Currently I’m in the inking process. I’m enjoying it and it gives me ideas and inspiration for my own comic project. More about both another time… to be continued.
This is Jack, he´s a little mad, a little insane too. He hates pumpkins. 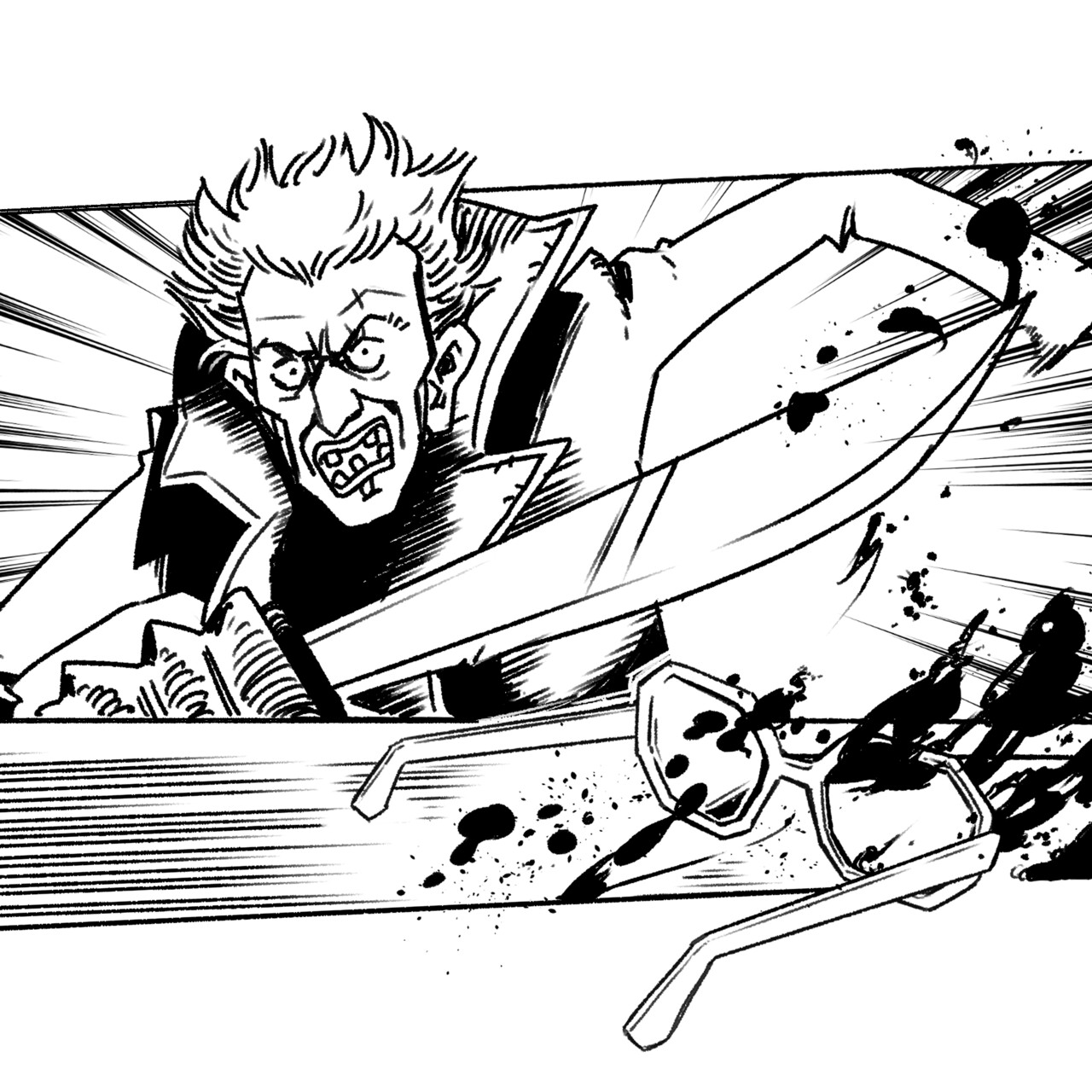 Well, I already had a pretty clear idea of what the place is gonna look like, based on various little sketches I did before. So it's more about trying out different shots in here. There's a second part in which I'm chosing one of the three scenes and taking it further. Which one do you like the best?

The iPad is really nice when I feel lazy and don't want to go to my desk and connect the drawing tablet. Or when it's just super cold and I want to be in bed. This is a drawing I made in bed. I like this one because I think it captures Hilda's personality and also because it has a lizard.
I think what happened here is that Yngvild and Hilda had to land to refuel somewhere and one moment that Yngvild didn't pay attebtion, Hilda was gone. She had to look for her everywhere and became grumpy. That's when she found her. So... can we keep it? 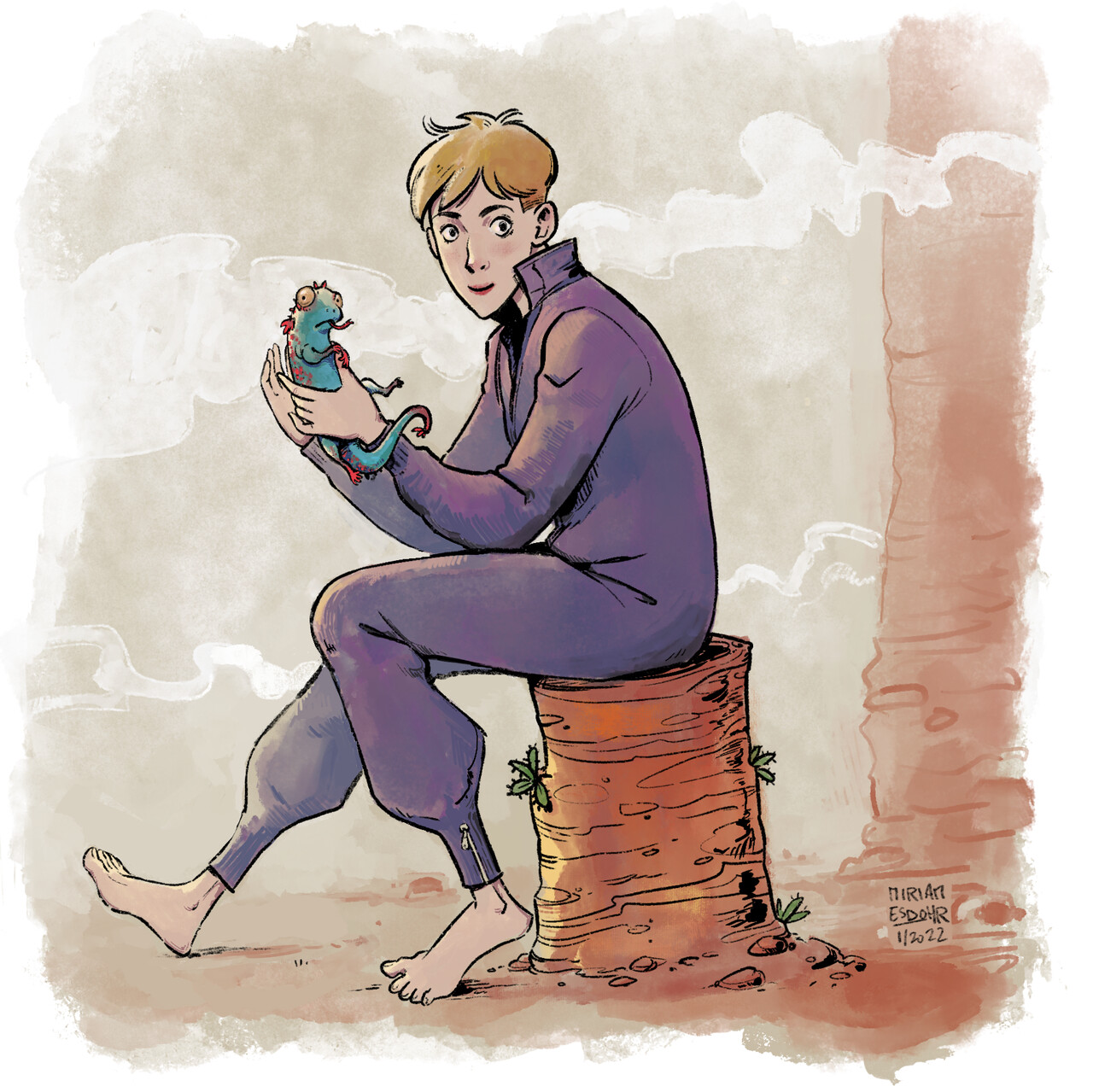 ...for now. Well, I want to become a Zen master after all. I am going to try to take my time with the art that I'm doing, when there's no deadline- I don't need to pressure myself to be fast just for the sake of it, right? Sometimes it's hard, though. I don't know why. And I bet I am not the only one.

Anyways, I am also trying to do more recordings of my drawing process. In Procreate on the iPad I like that I have to check video recording just once and then it will automatically remember to record my drawing. Because I am forgetful and don't always think of actively clicking "record". Not in time, that is. Sometimes I do remember when I am already half way done 😛 The finished illustration is already up in my portfolio.

I started drawing my Webtoon comic!

Finally I've started drawing the comic!
In the beginning I was struggling. First I struggled to even start! It's gonna be quite the project that I'm planning to work on over a long persiod of time. The story is a SciFi one, but not the kind of high SciFi that's super polished and with sleak designs and cool, flawless heroes. It's more fantasy in that sense but with Spaceships and other advanced technology. It's hard to compare to anything, really... this one is very personal to me. It's supposed to be a light-hearted story, even though it has some heavy topics underneath the surface. It's supposed to be fun, entertaining, easy to read and pleasant to look at. I'm trying to make a the story very flexible and it's going to continue until I one day want it to stop. But it has the potential to go on endlessly. So there is quite something ahead of me, which seemed a little intimidating to be honest.
But I now reached the point that it's flowing and fun instead of scary. I am excited and will show more soon!
Once I have some buffer I will start uploading it to Webtoons.com! 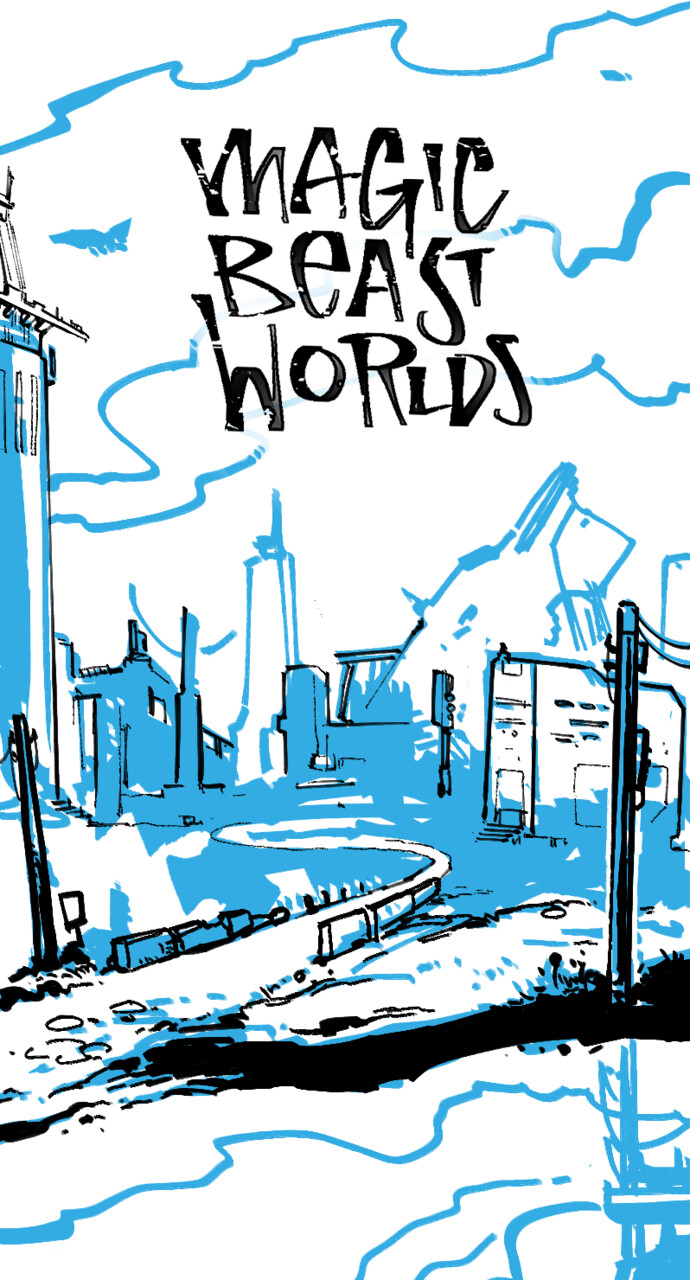 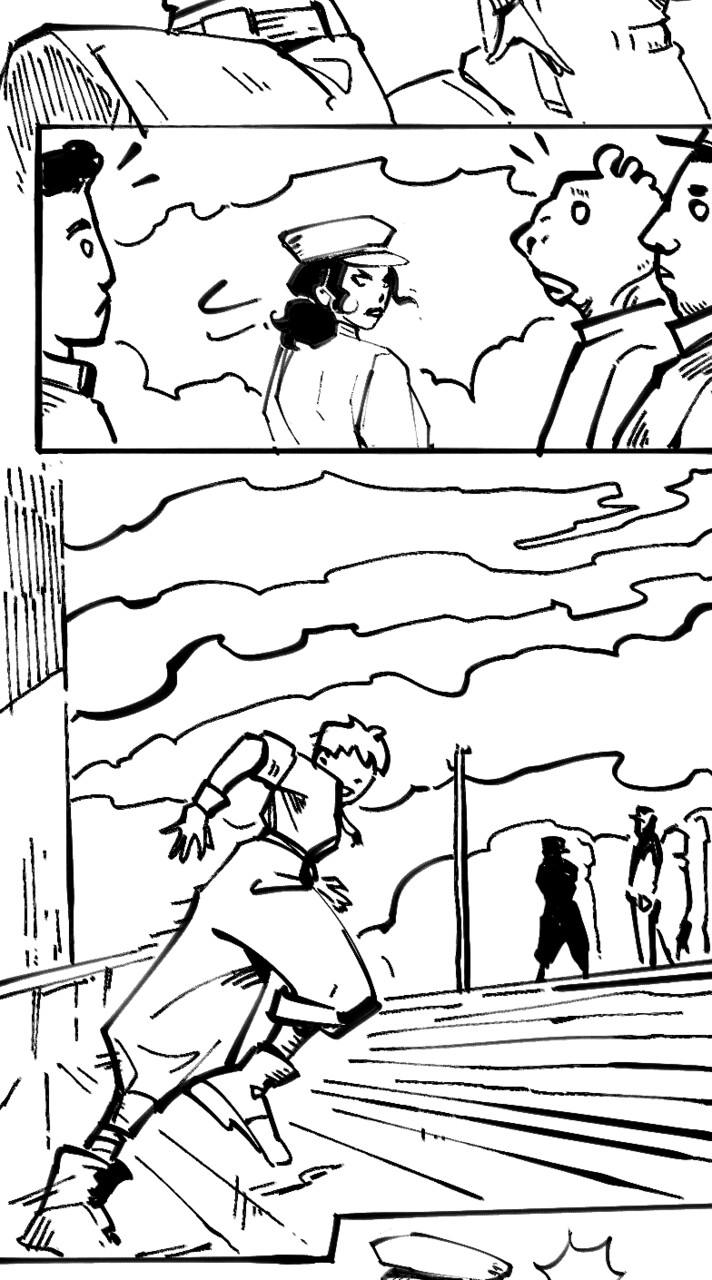 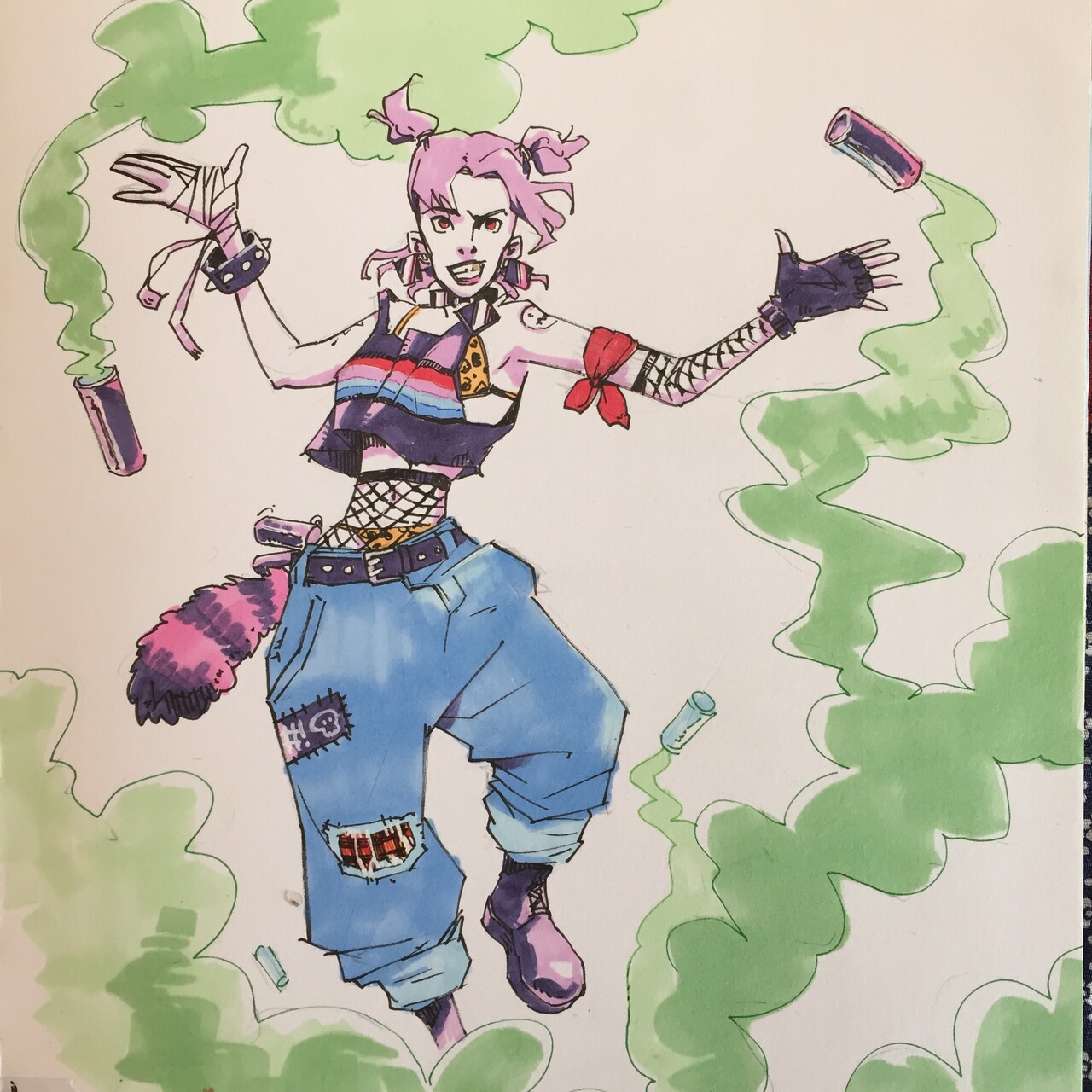 No, not really like that. But I've started making those brushes and I started by collecting some shapes, structures and patterns. Because I figured that this art journal that I've started - and I wrote a blog entry about my art journal too - is an awesome resource for that. I have continued drawing and exploring almost daily and noticed some stuff that I can perfectly use for a new brush set!
I did make some brushes in the past, mostly re-using brushes I've found online. I'm not gonna go into how exactly they are made, there are plenty of free tutorials about that and this isn't supposed to be a tutorial. It's just about sharing my process 😌
I did make that one aquarelle brushset for Photoshop completely from scratch before though and noticed that some people downloaded it so why not make more? 😀

I'm trying to do something a little more grungy this time. I have so much material, might even make two sets.

With the photos I took from my own work I'm currently making some brush tips and said patterns and textures to apply to them. There are still several left to do. You can see some of the stuff I'm gonna use below 👇 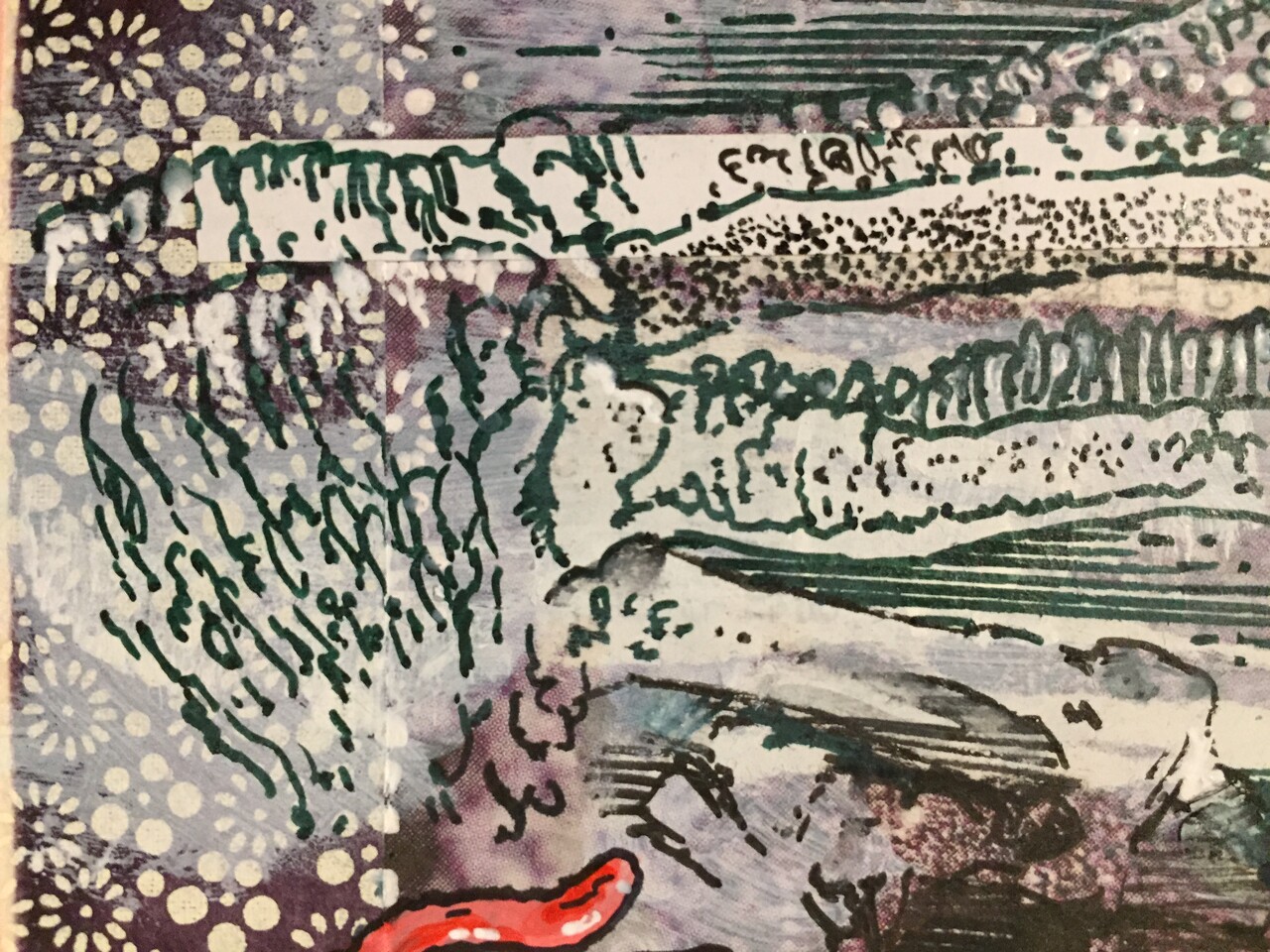 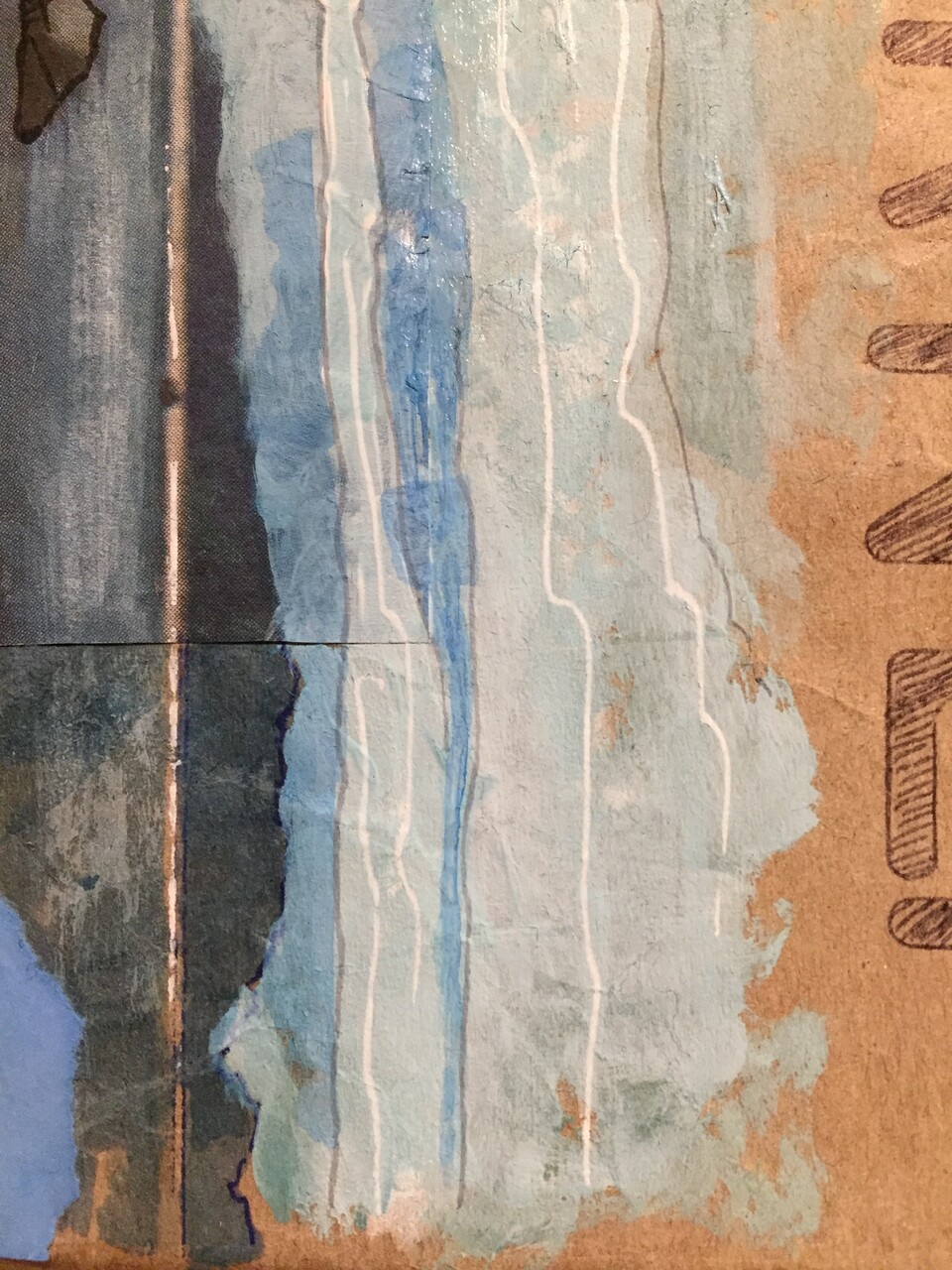 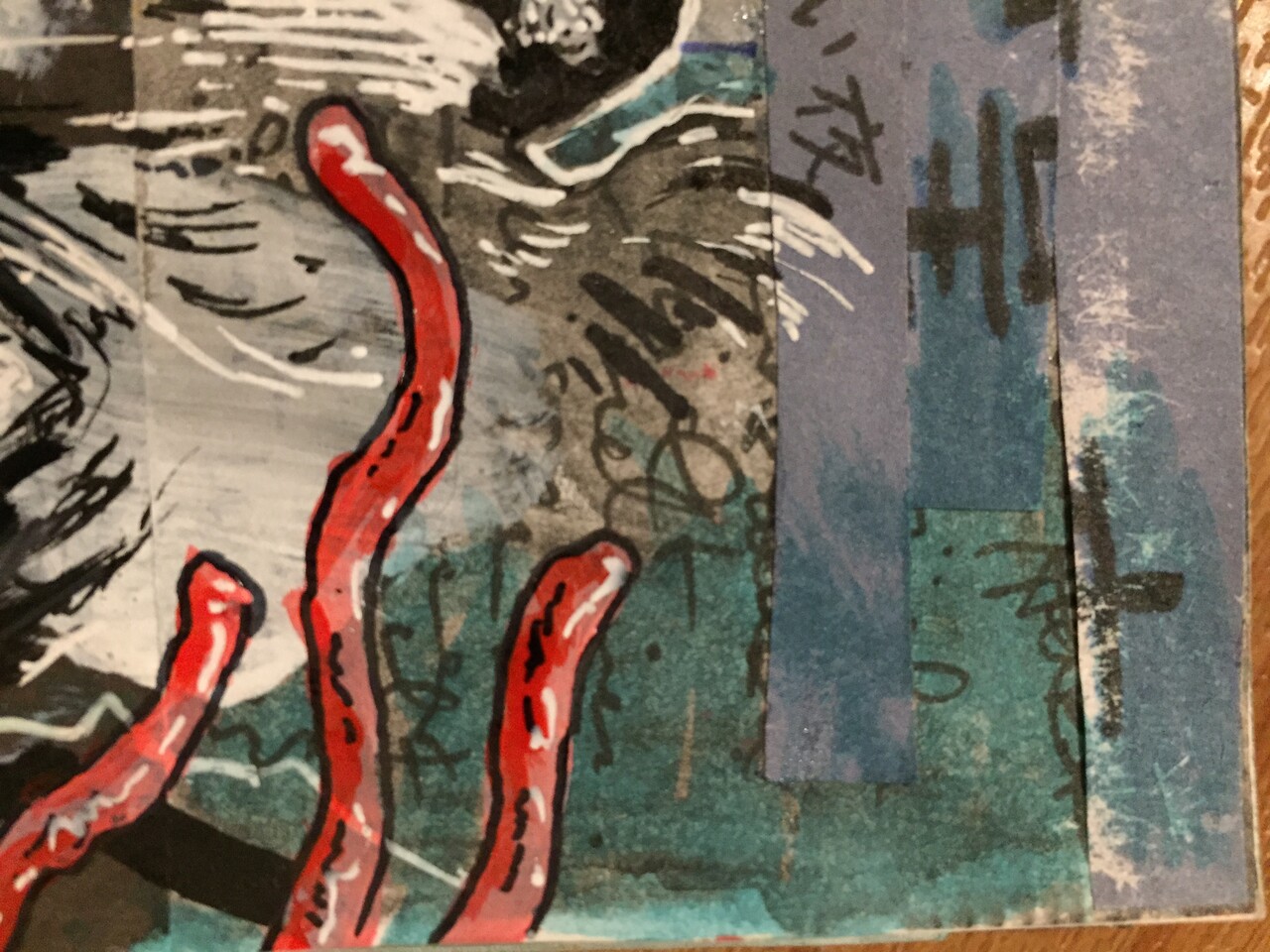 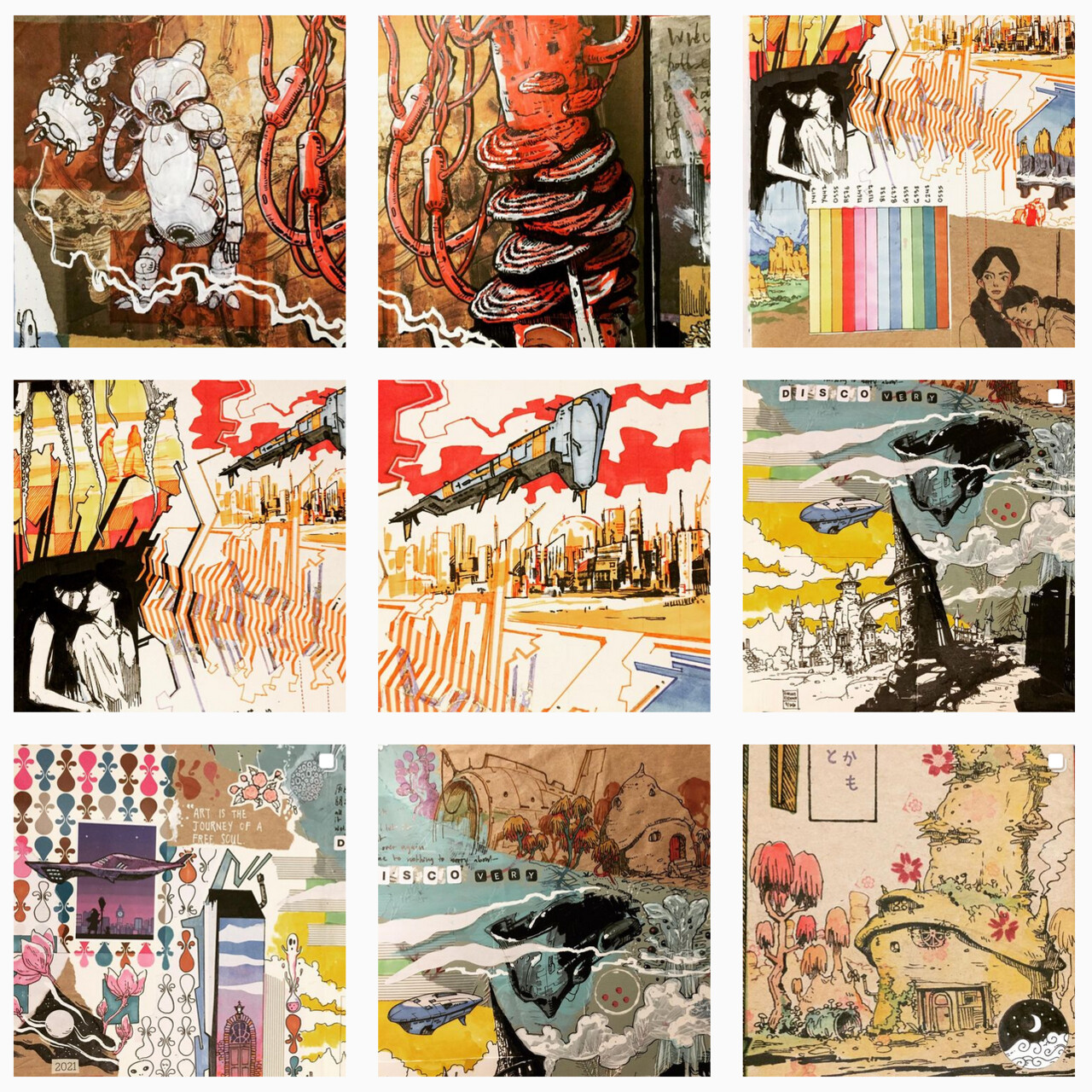 She has a final form too. But wait... I think the unfinished form never made it online.

Actually though, there wasn't that much process prior to this character illustration. Mainly because I had already settled on the basic faction colors and outfits and did almost all the experimenting on Hilda.
Although originally I had planned to give Yngvild the coat and then in the process descided against it. You can see the coat-version on the concept sheet I uploaded into my portfolio. 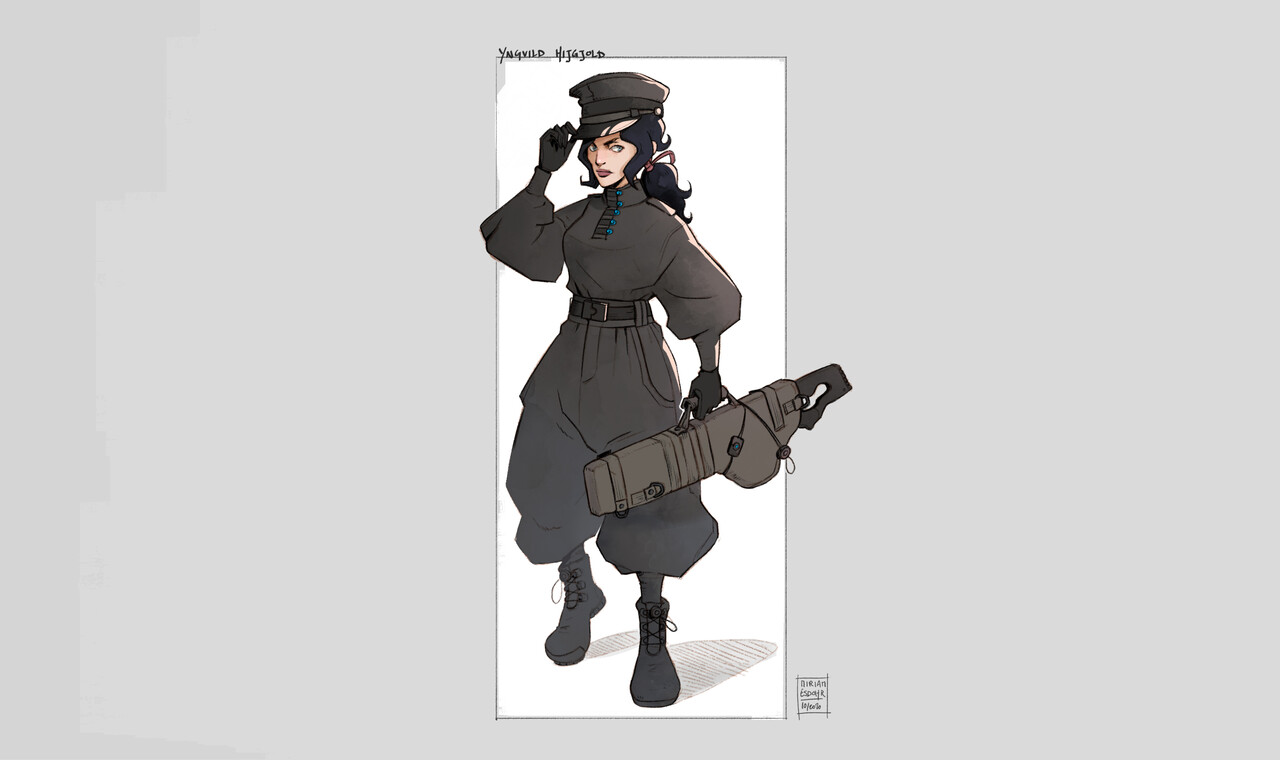 Yngvild is higher rank than Hilda, she's the commander and I chose presenting her in her formal outfit because I think it supports her personality well and shows that hierarchy better.

Now I'm really excited to move on with the project! There are tons of things I want to do regarding the world building but I also really want to finally start with some comic pages! I'll also rename the project, so see "Skymir" as a title-draft.

I've been planning to get the storyboard for Flint & Mortimer (not my story or characters) out of the way within the following two weeks (ideally within one) and will come up with a more structured plan regarding my personal project. I have to sort all of these ideas of what I want to do sorted in order to start and make progress without getting lost in the world building. Yep, there is always that danger. But if you're aware of it you can control it!